skip to main | skip to sidebar

IPL 3 and its aftermath

The controversy surrounding IPL has become so murky that one is not able to make sense of it.

Lalit Modi is no doubt a brilliant innovator and marketing man. As one who has no special interest in cricket, I admire the way IPL secured the free-to-net rights on You Tube; probably the first major sporting event in the world to be aired live on the net.

At the time of writing this post, almost all the franchisee owners have come out in support of Lalit Modi, the Commissioner of IPL and whose brain child it was. These owners include the Bollywood brigade, Vijay Mallya, Subroto Roy, Jay Mehta and many others.

However to the ordinary fan, a clean up of the tournament (if one is needed), and a smooth running is required to bring the focus back to the sport rather than its organization. After all it is the fan who pays for the extravaganza that is IPL. And let us not forget the fact that the IPL is owned by the BCCI, and the BCCI represents INDIAN cricket. The traditionalists in cricket would love to see the IPL fail and are revelling in the current controversy. It is time for the administrators to not only clean up the game but also to deliver the perception of cleaning up.

As a neutral, a few points:

- there shouldnt be any need for franchisee owners to declare their share holding pattern. they are business enterprises and like any other private enterprise, they should divulge what is required of private businesses and no more

- IPL has transformed the marketing and consumption of cricket world wide. It would be a shame if it had a short shelf life

- The IPL is Lalit Modi's baby. However he is not bigger than the IPL

- The system always wins
Posted by yadu tekale at 2:06 PM No comments:

i cant praise Ashraf (www.ashraflaidi.com) highly enough. his market insights are an eye opener and i will recommend him to any forex trader, raw or experienced.


thanks Ashraf.
Posted by yadu tekale at 1:46 PM No comments:

I know Paul very well and you get value from Innovar and their services.
Posted by yadu tekale at 11:58 PM No comments:

Rocket Singh Salesman of the Year

its been a long time since i have identified so much with a movie, but this particular movie is one. its a big banner production but feels like an indie movie and has a terrific supporting cast.

its not a movie thats likely to do well with the masses but will strike a chord with the thinking man.

and the spiderman quote is sheer gold.
Posted by yadu tekale at 12:56 AM No comments:

where i stand on this is pretty obvious, but still to reinforce my point, here are my comments on Esteban's blog

i dont see SCRM as anything new but an evolution of CRM and not a revolution. at the end of the day the adoption of social technologies isn't radically going to change the face of business.
Posted by yadu tekale at 9:16 AM No comments:

was following this debate, http://www.socialmediatoday.com/SMC/112298, and felt the need to respond there and post in more detail here.

i do not see any great difference between CRM and SCRM except a label change. in fact i think the need to rebrand is more a reflection of the young age of the industry than anything else.

SCRM uses social technology to enable businesses reach out to customers. so what exactly has changed?

that doesnt mean i think SCRM is irrelevant ( i think the label is, but its here to stay). businesses (some of them) now have to be more responsive towards aggregate behaviour. business has also got yet another tool from which to extract behavioural data and then strategize and deliver.

there seems to be an underlying message in most blogs/posts on SCRM, that with the advent of social technology, the consumer is king and has extraordinary power over business. I disagree with such notions. If anything, social technology has made irrelevant the individual consumer because of its aggregating nature

some random thoughts on CRM and SCRM

· CRM by itself is meaningless. It is a term created to describe how businesses interact with customers through several and often disparate functions/processes such as sales, accounts, support etc. CRM has become synonymous with the underlying technology platform to collate consumer data/behaviour through these functions/processes.

and lastly for me atleast, SCRM = old wine but in a user friendly bottle. 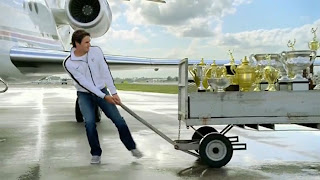 I was hoping that the adrenaline would die down today and saner minds would prevail, but when you have the tennis equivalent of an Obama moment, the high will continue for quite some time.

So... this might be interpreted as a drool jerker and those of a delicate composition should look away.

All along I have maintained that Roger Federer's best years are past and sometime earlier this year I had also predicted that no one beyond the age of 26 will win anything noteworthy this year. I have been properly humbled by a master who himself has experienced what humbling means.

The last two weeks we saw the incredible runs of Robin Soderling and Juan Martin Del Potro and despite my being a Federer appreciator, I firmly believed that one of the two would be his nemesis this year.

Federer called upon his survival skills against Juan Martin Del Potro (who surely is a top 3 contender now) but if my hopes started rising that Federer had a chance against Robin Soderling, they were quickly dashed when I re-watched Soderling oust Gonzalez and pit the clay of Roland Garros with craters caused by his forehands.

So came the final and I was expecting Soderling come out with his bazookas blazing, bring to court his ferocity of attitude and make Federer wilt.

Federer forgot to read that script when he left the hotel.

All we could see was the maestro was back with quick, short points and drop dead shots that left Soderling gasping at the base line.

And the aces! Federer has never been in the Pete Sampras class of ace mongering, but yesterday we saw a new ace merchant in play and that too on clay. Some of those aces defied physics and followed the unwritten rules that only genius is privy too. We have excellent statisticians on this board and it will be interesting to see how many aces Federer served and how they compare historically to past RG finals.

However, all along we were expecting Soderling to burst through, to unshackle his weapons and torch Federer’s dreams.

Didn't happen. A full day later the abiding memory of the final is that of control. Federer had that match in control, in his palm the moment the players stepped on court. Federer smothered Soderling's brilliance with his serves, his movement, and his drop shots. In Soderling’s own words, " But it's always -- you know, every time I played Roger, after the match I always said, I played so bad today. Now I learned that it's not that I played bad, he makes me play bad. So that's what's so difficult playing against him"

For me, this achievement of Federer’s is less about statistics and numbers and more to do with the human psyche. Very few of us can comprehend what he has achieved because we haven’t been there and done it. All champions are equally insecure too and Federer has had to battle his insecurities, demons, the continual media barrage, the weight of the fans, the loneliness of the tour, the records; day in and day out, and he came through all that yesterday as not just last man standing but deserved man standing.

Late at night when he was asleep, his subconscious must have kept on asking him especially these last few years, "Who am I? Can I do this? Am I worthy? Am I fake?” Yesterday he answered his subconscious.

And what does this say of us, us Federer appreciators?

Vicarious living is partly why champions in any field have a fan base. But there is more to fandom and appreciation than just vicarious living.

When you watch a Roger Federer, or for that matter a Raphael Nadal, a Tiger Woods or a Pete Sampras, you realise this is what Charles Darwin and Gregor Mendel set out to discover when they did their research, on the Beagle in one case and over peas in the other.

The coalescence of inherited traits, environment, and ability to evolve results in one Roger Federer out of a billion. Such benign freaks are worthy of following because they reaffirm why we no longer live in caves half naked. They provide a reference point for achievement and drag humanity forward just by being that reference point.

Till yesterday Robert Frost's lines must have resonated with Roger Federer.

Today it is Roger Federer unshackled.
Posted by yadu tekale at 11:24 PM No comments:

yadu tekale
used to call myself an ideator, a make-things-happener, a rainmaker.. these days labels are less important.. i like to generate wealth for myself and others, like to create jobs... deeply influenced by peter drucker and ck prahlad.. love writing in small caps.. differentiation matters!!!